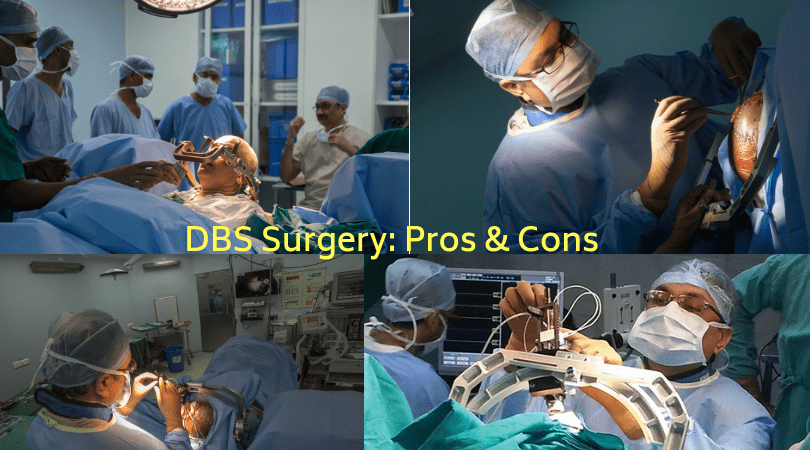 The full form of the DBS is also known as Deep Brain Stimulation. DBS surgery has applicable for recovering many diseases such as Parkinson Disease (PD),  Dystonia, OCD, essential tremor, sometime Psychological Disorder, Chronic Pain, Epilepsy, Tourette Syndrome. This DBS surgery helps to reduce or control the symptoms of the disease.

The DBS (Deep Brain Stimulation) surgery is a therapy wherein a wire known as ‘lead’ or electrodes is inserted into a brain and deliver electrical impulses and signals to specific brain cells. It has got four electrodes to supply electric current to four points of your brain

Deep Brain Stimulation is right for your specific situation such as, a patient who is suffering from Parkinson disease for at least four to five years,  who have breakthrough symptoms while on Levodopa, leading to significant off time.

Reduction of  Adverse Symptom: DBS often reduces symptoms significantly such as motor symptoms like stiffness, tremor, slowness, and Dyskinesia. DBS has also been shown to aid in on/off fluctuations, improve mood and quality of life, and increase overall energy levels.

Nor Remove Nerve Cells:  for doing DBS surgery, no need to remove any Nerve cells.  DBS does not damage portions of the brain.

Decreased Medication: DBS surgery helps to decrease medication and as well as Levodopa side effects, majorly cost of medication.

Individualized Treatment: Electrodes and stimulation frequency and intensity can be controlled by physicians and the individual with DBS, and can be subjectively altered when needed.

Independent Life:  Due to Parkinson disease, tremor, any movement disorder or dyskinesia, the patient depends on the other for their daily activities also. DBS surgery helps to control the symptom and allow people to do by himself.

Risk of Surgery or Surgical Side Effects: If you talk about the risk of surgery, then a risk of bleeding, stroke, infection, and accumulating fluid in the brain. Also,  we know that the brain is a complex and sensitive organ.

Results Aren’t Immediate: It will take months to work out the precise balance of DBS stimulation and medications to optimally management symptoms. Whereas certain symptoms could subside soon, it may take an extended quantity of your time to seek out the proper combination for long-term effects.

Invasive and Awake during Procedure: DBS surgery will involve an incision in the scalp, and access to deep elements of the brain.  Additionally,  individuals are awake during the procedure, which could be a scary situation for some.

Future Danger around Certain Electronics: Basic electronics are usually fine for those with DBS to be around, however, larger, more powerful machines, like a total body coil MRI, may be off-limits post-procedure.