Home » How is dental pain and Trigeminal Neuralgia, different? 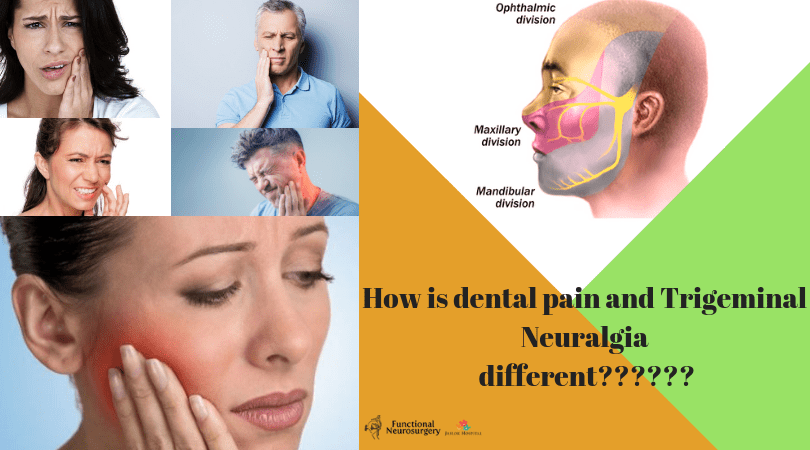 How is dental pain and Trigeminal Neuralgia, different?

How is dental pain and Trigeminal Neuralgia, different?

I had been living with severe pain in my teeth,  left the side of my face and sometimes head pain for 4 years. Initially, the pain used to come and go for a few seconds when  I ate or brushed. Like anybody else I rushed to the dentist, thinking it was something to do with the tooth. After several root canals as well as the extraction of my wisdom tooth, the pain still persisted. (Story by Sacchi Bindra). Today we will know that How is dental pain and trigeminal neuralgia, different?

As the pain caused by trigeminal neuralgia is often felt in the Jaw, teeth or gums. Many people with this condition initially visit their dentist rather than neurologist or neurosurgeon.

Initially, you are facing any problem then consult with physician doctor.

Your dentist will ask your symptoms and investigate your facial pain using a dental X-ray. Firstly, they will be finding other common causes of facial pain, such as dental infection or cracked tooth.

If your dentist can’t find a cause, it’s important not to undergo unnecessary treatment, such as a root canal filling or an extraction, even though you may be convinced that it’s a tooth-related problem.

If your dentist can’t find anything wrong, don’t try to persuade them to remove a particular tooth as this won’t solve the problem.

There are two separate trigeminal nerves, one on each side of the face. These nerves are responsible for carrying the sensation of pain and other sensations from the face to the brain. Each nerve has three branches (forehand, midface, and chin). It’s possible to have TN of any (or all) branches. TN causes intense pain in part or all of the face.

The pain can be brought on by mild stimulation of the face, such as brushing your teeth or shaving. Pain likes electric shocks or stabbing. Initially, people with TN( Trigeminal Neuralgia) can get short or mild pain, burning sensation over time they may experience longer and more frequent attacks.

You can get bouts of pain from a few seconds to several minutes. This series of attacks can last days, weeks or months. Such a condition can progress. Sometimes pain becomes constant.

You can face shooting or jabbing pain,  “electric shock-like” or “stabbing” pain. That makes you feel like an electric shock. Pain or attacks of trigeminal neuralgia can be triggered by certain actions or movements.

Dental Pain: It is a very monotonous pain. It is not like a sharp shooting pain (electric shock) of Trigeminal Neuralgia.

The Cause of Trigeminal Neuralgia

Cause of  Trigeminal neuralgia disease, compression of the Trigeminal nerve. The nerve inside the skull that transfer sensation of pain and touch from your face, teeth, and mouth to your brain.

Trigeminal nerve compression is caused by a nearby blood vessel pressing on the part of the nerve inside the skull. However, all patient’s with TN do not have vascular compression.

Medication: Medication will provide relief from Pain and reduce the number of attacks. Anti-seizure medications are drugs that block never firing and adjunctive medications include muscle relaxants and tricyclic antidepressants.

Radiofrequency Thermal Lesioning: This procedure is performed under general anesthesia and uses a long, hollow needle to guide an electrical current to the trigeminal nerve. You will awake during the process to help your doctor in identifying the exact location of the origin of the pain.

Once neurosurgeon will identify the site of the pain, the electrode is heated and it destroys the nerve.

Gamma knife Radiosurgery: It is a procedure used radiation focused on your Trigeminal nerve.

Microvascular decompression: It is a procedure which moves or takes out blood vessels that are affecting the nerve.

Suggestion for the Patient who is suffering from Pain

Keep a daily journal of symptoms. Also,  you should make a list any facial injuries, surgeries that have been performed on your face.