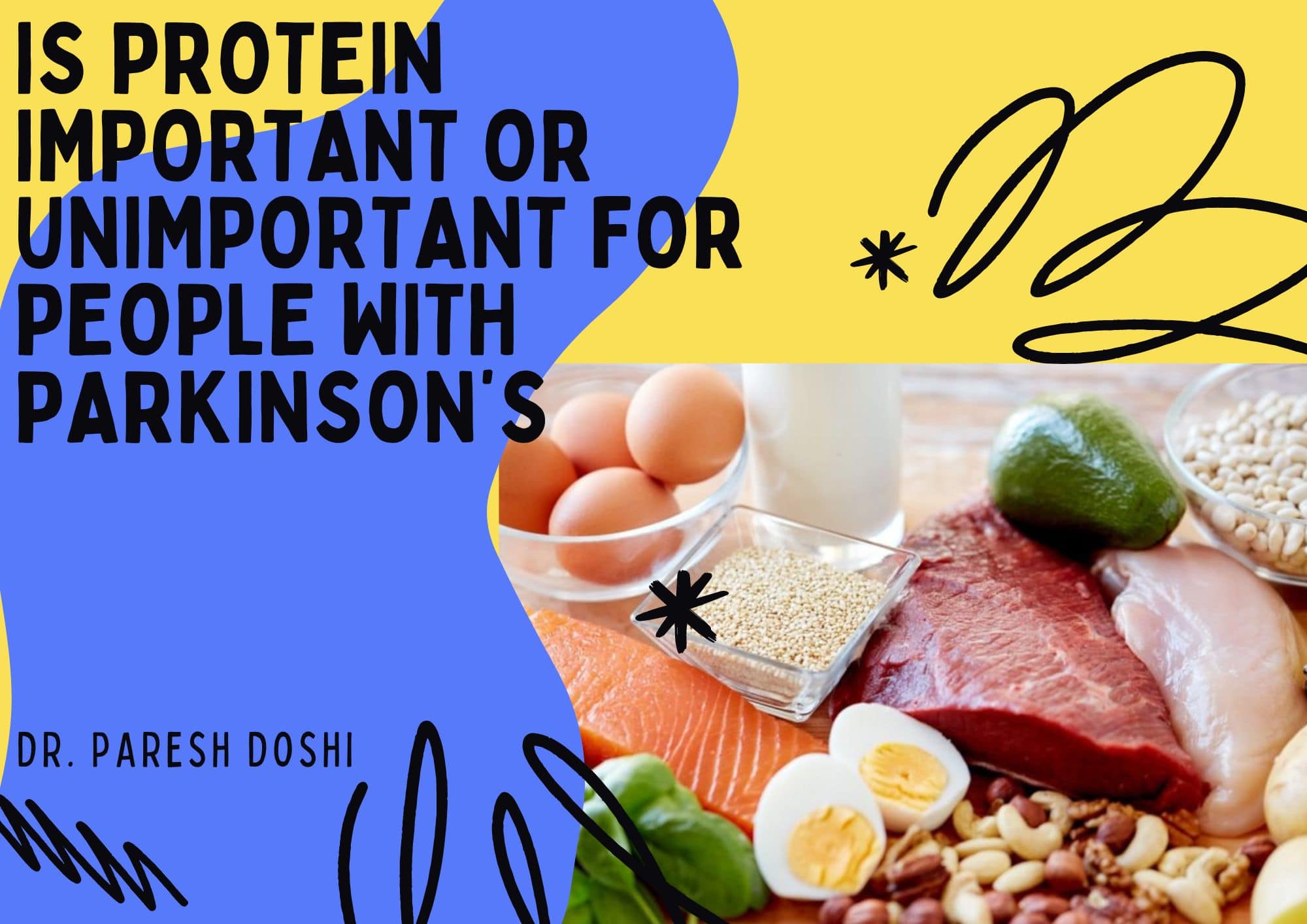 One day, there was a caregiver who came for consultation, she asked sister Bharati can I give her protein based on her diet. You must be wondering who is sister Bharati? She is a specialized nurse for Parkinson’s people.

Later on, I understood that he was very concerned that what should be the diet for the Pd person. Can I add protein to her diet? what is the connection between protein & Parkinson’s medication?

If you are the caregiver of PD people, you have the same query for the diet!

Few people have knowledge that consuming protein foods can negatively impact the symptoms of Parkinson’s disease and may even worsen the side effects of the medications.

It is not completely true.

Let’s understand what are proteins.

Proteins are large molecules that play many critical roles in the body. Proteins work in cells and are required for the structure, function, and regulation of the body’s tissues and organs. Without Protein, planning for a diet is worthless.

Proteins are made of amino acid that works as building blocks. Our body needs amino acids. Some amino acids can come only from high-rich protein foods.

We should know which protein-rich foods can provide the essential amino acids; we need.

The above examples are ‘complete’ sources of proteins. If you include just 1 of these types of food each day provides all the essential amino acids our bodies need. Examples of incomplete proteins: are pluses and lentils.

One should eat a combination of these foods to give his / her body all the essential amino acids it needs.

Our brains are made of neurons -that cells pass information around the body. Those cells use proteins to communicate with each other.

Amino acid tyrosine is found in a few different foods and is needed for our brain along with nerve cells to help produce a chemical called Dopamine. When some of these nerve cells have died in Parkinson’s people, they don’t have enough dopamine due to dead cells. We are not clear about the points of this, researchers are still doing research on this context.

Let’s understand the role of protein and Levodopa:

Many people with Parkinson’s have found that protein seems to interfere with how well levodopa is absorbed by their bodies. Because of this, you may benefit from taking your medications 30-60 minutes before you eat a meal.

The drug most commonly used to treat Parkinson’s disease, carbidopa-levodopa, is absorbed in your small intestine. That absorption can be disrupted if you take your medication shortly after eating a high-protein meal since it involves the same process. To help maximize the medication’s effects, eat high-protein foods at other times of the day. If you take your medicine in the morning, have oatmeal rather than high-protein eggs for breakfast, and save your protein intake for later in the day.

Eat low protein snack when you take your dose may help to reduce this side effect.

Let’s look at the structure & redistribution of a Protein-based diet for Parkinson’s people. 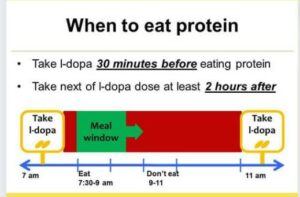 Parkinson’s people can take a protein-based diet in different ways that can make levodopa more effective and help reduce the feelings of sickness. It involves concentrating your protein at a certain time of the day.

Reduce the consumption of protein early in the day. This will help to increase your body’s response to medication and avoid motor fluctuations.

Eating your main protein meal during the evening is a slower response to medication.

We concluded that a protein-restricted diet during the daytime offers a fascinating technique for the control of motor response fluctuations in patients with Parkinson’s disease undergoing long-term levodopa treatment. But this therapy must be indicated carefully. The mechanism of this therapy may have something to do with the improvement of dopamine metabolism in the brain. 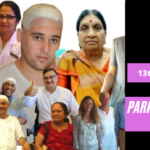