This specialised procedure is used to treat several movement disorders, ranging from dystonia to Parkinson’s disease.

With the introduction of levodopa in the treatment of Parkinson’s Disease (PD) the need for surgical intervention declined rapidly. 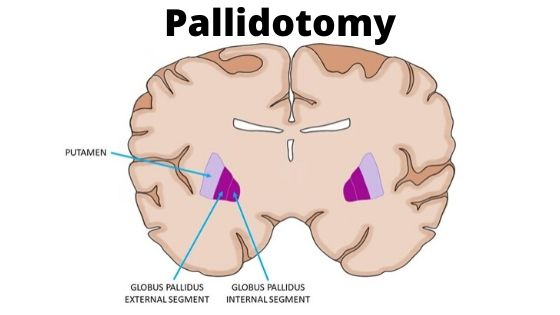 Long term follow up of patients on medical treatment showed increased dosing over period of time with dose related side effects in the form of dyskinesias and hallucinations.

Dr. Lauri Laitinen in 1985 was the first to demonstrate the benefits of pallidotomy by performing the procedure as described by Dr. Lars Leksell.

In 1992 he published his series of 38 patients treated with pallidotomy which showed 80-90% patients showed long lasting symptom relief. 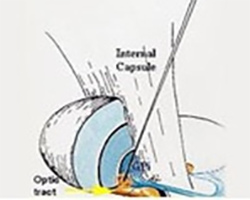 Drawing showing the relationship of the pallidal target to the internal capsule and optic tract.

Indications for Pallidotomy in Parkinson’s disease

Indications for Pallidotomy in Dystonia

Patients responding to levodopa in general show a good response to pallidotomy.  Symptoms like swallowing difficulty, hypophonic speech, postural instability, and freezing do not respond to pallidotomy and sometimes may worsen.

In cases of Dystonia there is approximately 70% success rate in controlling the dystonic symptoms and pain.

Secondary causes of Parkinsonism like MSA, PSP, Diffuse Lewy body disease needs to be ruled out before offering Pallidotomy. These patients don not derive benefit from the procedure and may even worsen. Bilateral pallidotomies have not been extensively studied in controlled trial but have shown both long term and short term benefits. Still Pallidotomy is performed unilaterally on the side opposite to the involved side.