Also known as cervical dystonia or a “Wry neck” can now respond to various forms of advanced surgical treatment, as seen here…

Torticollis is also known as wry neck or Loxia.

The word torticollis is derived from the Latin words ‘tortus’ and ‘collum’, meaning twisted and neck, respectively.

It is a type of dystonic movement disorder most commonly seen in adults age 30 to 40 years of age. Spasmodic torticollis is adult-onset focal or segmental dystonia with a variable combination of neck flexion, extension, rotation, and tilting.

Each individual has a characteristic dystonic posture, which is present at rest, worsens with movement or stress, and improves during sleep.

Torticollis develops in stages, starting with a feeling of tension in the neck muscles, followed by intermittent posturing of the neck with head-turning.

Over a period of time, this becomes constant and fixed, with a little relief during sleep. Symptoms may progress rapidly over several weeks or gradually over several years until it reaches a stage where no more change occurs, which happens 3 to 5 years after the initial manifestation. 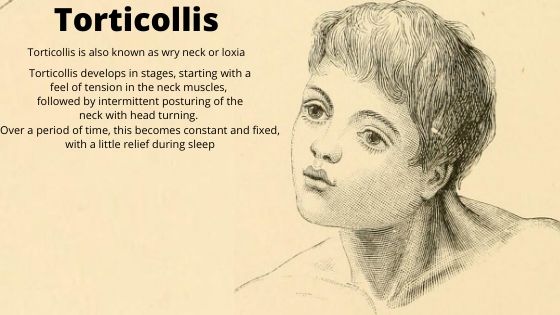 Temporary spontaneous remission is almost unusual. But if surgery is done at an early stage, dystonia can be controlled.

Rotation of chin towards the shoulder.