Deep brain stimulation (DBS) involves the implantation of a neurostimulator device that sends electrical impulses to definite targets inside the brain, i.e. the different brain nuclei & stimulates neurons located in it through implanted electrodes. 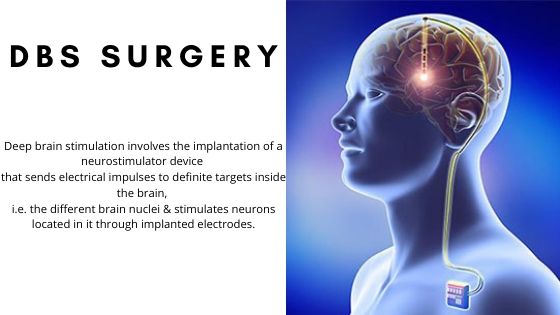 The DBS system composed of DBS leads containing four to eight electrodes or contact points that are implanted into the precise targets deep inside the brain. The lead comes out through a burr hole on the skull that connects to an extension wire which eventually connects to an electrical pulse generator (also called as pacemaker)that is preferably implanted under the skin over the left side chest wall.

DBS works by delivering the electrical impulses to the target areas & thus exerts its therapeutic effect.

Deep Brain Stimulation is much superior to the ablative surgeries those were in practice in the past for Parkinson’s disease and various other movement disorders. Subthalamic nucleus (STN), Globus pallidus internus (GPI) &Ventro-intermedius(VIM) nucleus of thalamus are structures within the brain are best targeted for Parkinson’s disease, dystonia & tremor respectively although each of these target sites can be used interchangeably for different movement disorders.

Deep brain stimulation (DBS) has become lifeline in the treatment of advanced Parkinson’s disease (PD) in the last decade. It’s associated with minimal morbidity & there is noticeable improvements in motor functions and quality of life in PD patients.

Around the world, DBS surgery has been performed on more than 1,50,000 patients of PD with remarkable improvements.

Thorough understanding about the principles of DBS, knowledge regarding the disease being treated and merging the medical therapy along with stimulation is required to achieve smooth control of the disease.

Jaslok Hospital & Research Centre has been highly successful in developing a multi-disciplinary team approach for smooth conductance of this surgery. 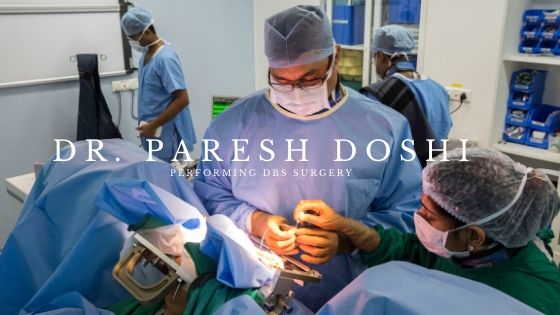 Expertise of speech therapist, occupational therapist and other specialists is also obtained whenever required.

The success of DBS largely dependent upon the selection of the appropriate patients as well as the accurate implantation of the stimulation electrodes, that necessitates careful imaging-based pre-targeting, extensive electro-physiological exploration of the targets during surgery & carefully executed individualised post-operative programming.