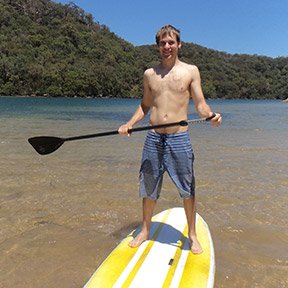 “Everything is going very well. I started working 3 weeks ago, it’s gone well. I am getting into the routine of it now and it is a lot easier now, compared to when i was unwell. It is good being able to work and to be able to support myself. I am now doing everything i used to do before i got sick [work, church, friends, exercise, beach and motorbikes] which is amazing and i feel pretty much completely better. I am more than happy to do so because DBS has changed my life. I had want people who were in my situation to hear that DBS is a treatment for depression and that it is possible to get. I was lucky that i found out about the treatment 2 years ago on the internet. Because if i had not found it myself, i still would probably not have heard about it, let alone had the surgery. Thanks again to you and all your team for all your help. 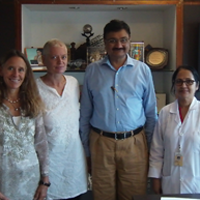 I am 50 yrs old and have been fighting depression and anxiety since I was 16 years old. I have had negative thoughts trouble functioning and many years of severe symptoms. In my childhood from 5 years to 17 years, I swam 5-8 times per week competitively. This kept my depression at bay for the most part. Yet, I have being sexually abused by my swim coach from age 13 to 17 yrs. This made things much worse for me. I was able to complete college at U.C Berkeley and my Master’s degree in Education. I taught in a school then continued to consult educators during my 30s. During my 20s to 30s, I did a lot of long distance running and was always taking an antidepressant. Yet,  I still fought anxiety & depression. At age 41 I had to have a hysterectomy due to severe endometriosis. This surgery was so traumatic that I was never the same throughout my 40s. I had nervous breakdown went to several psychiatric hospitals and was put on many many drugs. All had terrible side effects yet I was too scared to stop then. My depression and anxiety became worse and worse to where I could barely hold down a job. I also tried shock therapy, TMS, ketamine infusion and decade of psychotherapy ( and probably 20 medications ).

Three years ago my husband saw a program on DBS about a woman in the US. She also had decades of Depression but the surgery worked wonders for her. Since then I tried and tried to enter a clinical trial in the U.S but was unsuccessful. This is when I found out about Dr. Paresh Doshi online. I immediately emailed him and the next day he wrote back and said: “Surely we can help you “. It was the first hope I had in 10 yrs. By this time I was on disability and basically was not functioning, barely able to get out of bed. It was incredible difficult to make the arrangements to come to Jaslok Hospital in Mumbai but with the help of my Friend Vel Nesterech ( a nurse ), I was able to get here.

I had the surgery 6 days ago. As soon as they turned on the electrodes my feeling of dread, despondency and wishing I was dead and the extreme anxiety almost completely subsided. It felt incredible. I would like to thank Dr. Paresh Doshi & his entire team from the bottom of my heart. I had never received such incredible & compassionate care. The whole team has been amazing, thorough and dedicated. I feel like they have saved my life. Everyone is unbelievably professional and humane. It is such a well-rounded team. They calmed & encouraged throughout the whole process. The whole team made me feel like I was being so well cared for on every level and every day they provided excellent care. I am amazed at the care I am given. The whole hospital staffs have taken care of my every need.

After surgery, I found noticeable change in my mood, Today I am free from OCD & depression. 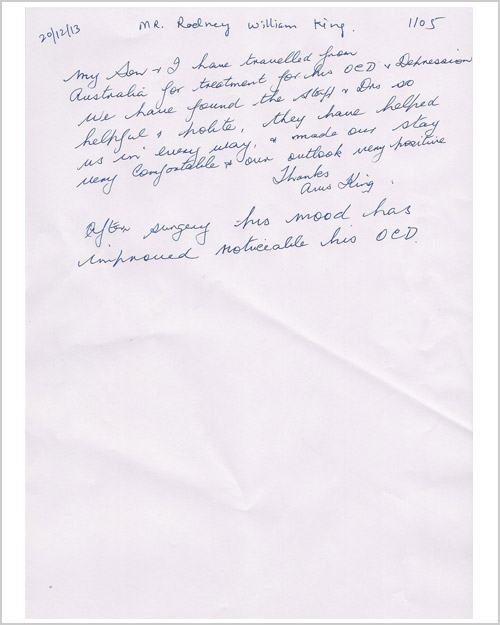 After DBS surgery for OCD

After DBS surgery for OCD

21 year old male, Right Handed came with chief complaints of decreased attention, restlessness, aggressiveness and repetitive behaviour since childhood. He was diagnosed as ADHD in 2004 and treated accordingly. He was attention deficit and left his work without completion. But with time he started behaving aggressively. He continued to undergo medical treatment and his study was affected. Due to his behaviour his teacher and friends commented upon him which caused depression and aggression in him. He is fond of music used to play instruments continuously.

In 2013 he started demonstrating repetitive behaviour and obsessive thinking. A diagnosis of OCD was made and he was commenced on medical treatment. Due to this he had to discontinue his study. He becomes aggressive and violent if he is stopped to perform acts. He used to beat parents and other persons when he was angry or stopped to perform repetitive acts. He is restless every time and continues to walk here and there aimlessly with bizarre movements. He has urge to throw things specially pen, outside of window. His sister also gets angry at small issues. He underwent surgery for refractory error in 2004 and then LASER surgery for same refractive error in 2016.

After DBS surgery his aggressiveness & OCD have been controlled and doses of medications were adjusted at the time of discharge by the psychiatrist. His symptoms are well controlled.