Ablative surgery to treat mental illnesses is one of the therapies that has expanded more rapidly and widely as a non-pharmacological therapy. Throughout decades many targets approaches and techniques have been tried with diverse and sometimes contradictory outcomes. Although the effects on mood gained the attention of medical community, due to the growing prevalence and socioeconomic burden, often no objective measurement of the effects was performed and probably misdiagnosed patients were included into the studies.

Jean Talairach based on the leucotomy work got the idea to disconnect frontothalamic fibers e.g. fibers running between the subgenual anterior cingulate cortex, the orbitofrontal cortex, the medial anterior and dorsomedial thalamic nuclei. The procedure represented in that way a restricted lobotomy procedure and was performed stereo tactically by electro coagulation between the anterior and mid third of the anterior limb of the internal capsule at the level of the interventricular foramen. Lars Leksell propagated this procedure in Sweden were the procedure also have been performed with the gamma knife.

During the course of years, the target got more refined. Additional information suggested that the ventral part of the internal capsule was surrounded by functionally active an important areas like red nucleus of stria terminals, nucleus accumbens, ventral striatum etc. Nuttin et. al showed that the initial Capsulotomy target can be further modified to move posteriorly and ventrally to achieve better outcomes. The current strategy is to use stereotactic techniques to make a lesion in the VC/VS area. We have also now performed lesions in nucleus accumbens which are much smaller and have lesser side effects.

Results: There is no age limit for the surgery but capsulotomy below the age of 20 has not been reported. The anterior capsulotomy has been reported to be especially effective against obsessive compulsive disorder with a long lasting improvement among 48–78%. Side effects are generally few and transient consisting of headache, confusion, urinary incontinence and weight gain. The most prevalent side effect is tiredness and lack of initiative, this lethargia, although generally transient has been reported to last for several weeks or months and at least in some case may result in a persistent mild apathy or dominant frontal lobe syndrome.
We have performed 1 classical anterior capsulotomy and 3 Capsulotomy in the region of nucleus accumbens and VC/VS with excellent results 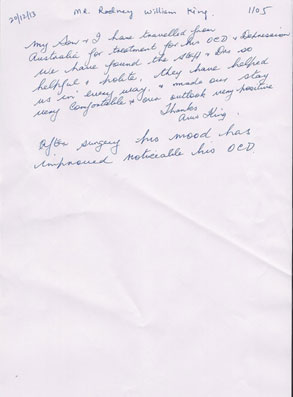 In 1967,  Ballantine described the first stereotactic anterior cingulotomy for psychiatric disorders including depression, after the publication of reports by Foltz and White who by that time had carried out stereotactic cingulotomies in patients with untreatable pain. The stereotactic neurosurgical technique was applied for the first time in patients by Spiegel and Wycis in 1947. It was a milestone in neurosurgery because specific deep targets could be reached through one burr-hole by using internal cerebral landmarks. Ballantine reported an improvement in 77% of operated patients with comorbid fear and depression. Other studies showed an improvement between 44% and 92% with personality changes, epilepsy, weight gain and urine incontinence as the most reported side effects. Cingulotomy is more commonly used for treating depression than OCD.

In 1964, Knight described the stereotactic subcaudate tractotomy using radioactive Yttrium implants in order to perform lesions anteroventral to the head of the caudate nucleus in the substantia innominate (SI). The goal was to interrupt the SI fibers that run from the frontal cortex and amygdala to the hypothalamus. From the initial 15 depressive patients whom he operated on 14 remained therapy-free after surgery. Other studies showed improvement percentages of 59– 100%. Subcaudate tractotomy is not commonly practiced in present times.

In 1973, Kelly and Richardson described the stereotactic limbic leucotomy which consisted of an anterior cingulotomy in combination with a subcaudate tractotomy. Previous studies involving both areas had shown good results when performed separately. Experimental results had already shown a relation between the autonomous responses and emotions at the level of the limbic system. Intraoperative stimulation was applied to patients in order to evoke physiological responses which would confirm the exact location of the electrode in the target. Of the first 40 operated patients five of whom with depression four showed mild to large improvement of depressive symptoms. Three other studies showed an improvement percentage of 30–78%. The most common reported side effects were drowsiness, weight gain and memory problems but also epilepsy, urine incontinence and personality changes were described. This surgery is practiced occasionally in much selected cases especially if they fail one of the procedures.

Terzian and Ore confirmed that there was a taming effect in human beings following removal of temporal cortical sturctures and amygdala. Over the next decades there was increasing evidence that the amygdaloid nucleus was a dominant component of the basolateral limbic circuit and actively involved in the development of aggressive behavior. Based on these observations Narabayashi et al. described a clinical series of 60 patients who had undergone stereotactic amygdalotomy for severe aggressive behavior. Since that initial report there have been 500 reported cases of stereotactic amygdalotomy for various behavioral disturbances and epilepsy with varying results.