The requested URL index.php was not found on this server.

Most of the symptoms of Parkinson’s disease can be effectively controlled by Medical treatment. With proper medical management & on regular medications, most patients carry out their daily activities up to 5 to 10 year. 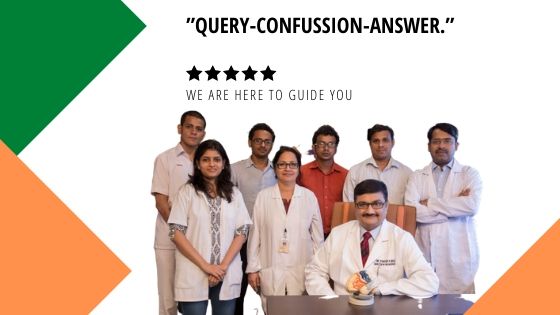 But after certain period, a stage is reached when drugs alone didn’t give adequate relief from symptoms and patient’s routine daily activity is interfered by repeated and sudden “off” periods.

This frequent alternate “Off” periods and “on” phase dyskinesia are features of advanced Parkinson’s disease where drugs are less effective and surgical options have an important role to play.

What are the various surgical targets for Parkinson’s disease surgery?

There are 3 different nuclei which are targeted in various movement disorders including Parkinson’s disease are; the Globus pallidus internus (GPi), the subthalamic nucleus (STN), and the ventrointermedius (VIM) nucleus of the thalamus.

Options for treatment include the stimulation of one or more of these three areas (GPi, STN and VIM) by implantation of electrodes.

Alternatively, a technique called lesioning of the three nuclei can be done which does not require implantation of electrodes and pacemaker and thereby reduces the cost.

However, the flexibility of titration (adjustment) of therapy available from the DBS is not available. 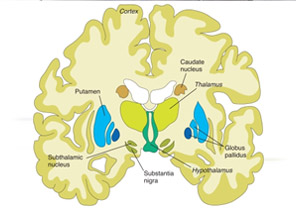 Cut the Section of the Srain Showing diffrent target 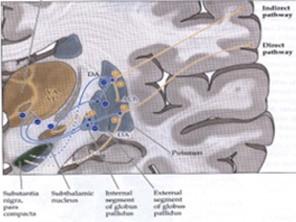 Interconnection between the Parikson’s disease targets

When should one think about surgery?`

Presently it can be offered to any patient: Who is not satisfied with his/her level of control of Parkinson’s disease with drugs or he exhibits Parkinson’s disease symptoms causing a decline in the quality of life even after an adequate and reasonable trial of medications.

So who is the candidate for STN Lesioning?

Presently we offer this surgery to patients below 65 years& who cannot afford DBS surgery or have difficulty in getting access to physician for post DBS programming.

What are the advantages of Parkinson disease surgery?

The improvement in disabilities due to Parkinson’s disease is the biggest advantage of surgery.

Most of the patients resume his/her professional work & become independent after surgery. The activities of daily living improve as well as most of the motor symptoms of Parkinson’s disease.

Marked control of OFF period symptoms like tremors, stiffness pain are the major surgical benefits of DBS.

Patients get good sleep & the dyskinesias associated with advanced PD also disappear. They get smooth ON phase and for longer duration.

Is there any age limit for Parkinson’s disease surgery?

Extremes of age are not constraints for DBS surgery. Usually DBS is offered to patients between 40 to 75 years of age.  The average age of patient is around 53 years in our surgical series.

Even young patients who think about this surgery should be offered the surgery.  The youngest patient is 7 years of age & the oldest patient has been 85 years old in our surgical series.

There are no major contraindications for DBS surgery. Common diseases like diabetes, hypertension or cardiac problems are not considered as contraindications to surgery. However, in presence of active infection or blood clotting disorders the surgery should be avoided till correction of these abnormalities.

What tests are needed prior to surgery?

Parkinson’s disease is mainly diagnosed on clinical basis. Some patients need a brain MRI as an adjunct to clinical diagnosis.

Levodopa challenge test is mandatory & is done both in off medication & on medication for assessment of the improvement of symptoms in ON medication.

Cognitive assessment is essential prior to surgery. Routine blood investigation& urine examination are done to rule out any abnormality.

Please refer to the section Overview of surgical procedure

How long does the surgery take?

The actual surgery takes about three to four hours, but the entire procedure including the pre-operative & post-operative CT scans take around five to six hours.

What type of anaesthesia would I be given before the surgery?

On the first day of surgery, leads are implanted under local anaesthesia with patient fully awake to assess the clinical improvement in the symptoms like Tremors, Rigidity& Bradykinesia.

Eye ball movements are checked for any side effect.  Next day, the pacemaker (IPG) implantation is done under general anaesthesia.

If the patient is awake, does it not cause any discomfort or pain?

No, the entire surgery is a completely painless procedure and without any discomfort. We always try to make the entire procedure very much comfortable for the patient & we do have an anesthetist in the team to monitor the patient during surgery.

Who performs this procedure?

The procedure should only be performed at a centre that is well equipped to deal with this complex neurosurgical procedure as it requires advanced diagnostic facilities like 3Tesla MRI & other advanced neurosurgical gadgets, a dedicated multi-disciplinary, experienced team to deal with the movement disorders that consists of neurosurgeons, neurologists, neuropsychologists & Parkinson nurse. Jaslok Hospital and Research Centre, in Mumbai, India, is one such place where all the state of art facilities is available under one roof with dedicated Functional Neurosurgery and Movement Disorder departments having the necessary expertise to deal with such complex neurosurgical procedure.

Besides being Director of Functional Neurosurgery programme of Jaslok hospital, Dr. Paresh Doshi and his team offers this surgery to Apollo group of Hospitals all over India & Sterling hospitals, Ahmedabad etc.

What are the risks of surgery?

The surgery is quite safe both in young & old age group.  There is a negligible risk of limb weakness or visual disturbance.

We have observed less than 2% risk of serious complications that is reported in our surgical series of DBS (which is the largest no. of surgeries for Parkinson’s disease performed in India).

You can go through our article titled “Long-Term Surgical and Hardware Related Complications of Deep Brain Stimulation” to know about different complications related to DBS.

When does the patient realize the benefit of surgery?

The improvement is clearly visible &realised immediately on the operation table. The tremors lessen with reduction in stiffness, bradykinesia and pain.

We have started DBS surgery in October 1999& till date we have performed more than 500 cases of Deep Brain Stimulation out of which 435+ cases are of subthalamic nucleus stimulation followed by GPI stimulation& other targets.

We have reported the analysis of our surgical outcome at the end of two years, four years and so on in the Neurology India and other Movement Disorders Journals. 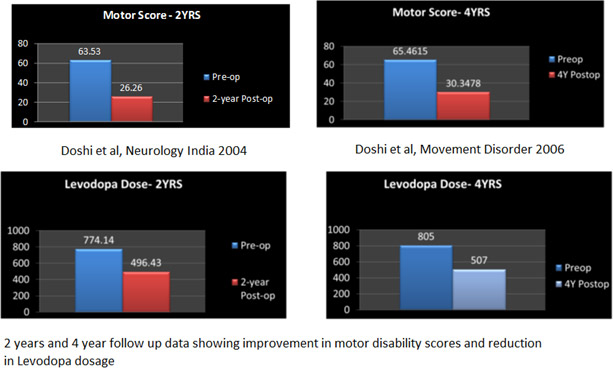 What should be the expected outcome of the surgery?

It improves most of the motor symptoms of the PD patient. The patient becomes independent & therefore activities of daily living improve.

The duration of good quality of life improves to 80-85% in a day along with reduction in doses of medication. Younger patients can even go back to professional work.

Will the surgery cure hallucinations?

Yes. As the disease process progresses in PD, patients require higher doses of medications to control the symptoms.

This higher dose of medications gives rise to hallucinations as side effects.

The DBS surgery helps in reduction of doses of medication for PD and thus has a modulatory effect on control of hallucinations.

How long does it take the full benefit of DBS to be apparent?

Usually the improvement in the symptoms of Parkinson’s disease takes few days or 2 -3 months to stabilise after surgery & reach maximum level after programming & medication adjustment.

Multiple programming sessions may be needed to get optimum benefit from surgery.

Can patients control the Deep Brain Stimulation device themselves?

The patient is given a remote device after surgery for controlling the stimulation parameter as & when required.

Patient and their care takers are demonstrated & trained by our specialist PD nurse regarding the usage of this device in time of need.

It’s not absolutely mandatory for them to use it , but the device can be used when stimulation parameter needs to be changed according to the symptoms.

There are no restrictions to the no. of times the device can be used in a day but too frequent changing of stimulation parameters should be avoided.

How many programming sessions & follow ups will I need?

We usually do the first programming session before the patient gets discharged from the hospital after DBS surgery.

After the first programming session, patient should come back after 3 months for reprogramming to optimize DBS setting. The next schedules of programming should be after 6 months & then annually.

It generally takes about 3-6 months to go through the process of DBS programming & medication adjustment for getting optimum benefit.

Whom do I call if I have any question or any problem?

The best way is to write an email. However, in case of urgency you can contact Dr. Doshi’s office. You will be also given a personal no. to call once you have undergone surgery.

Whether my non-motor symptoms will improve or not? e.g. Salivation, Constipation, Sleep disorder etc.?

Some of these symptoms like pain, sleep and constipation improve after surgery. However, symptoms of blepherospasm, postural hypotension, burning, salivation may or may not respond.

How many days are required for hospitalization for surgery?

For STN DBS surgery, the usual hospitalization is for 12 days and for STN lesioning it is about 4 days.

When can patient resume his daily life style after surgery?

The patient is hospitalised for three to four days after lesioning surgery like thalamotomy and pallidotomy.

After DBS surgery, usually the patient stays in the hospital for seven to ten days.

Patients’ who have undergone DBS previously, have been able to claim reimbursement from medical insurers according to their terms and conditions.

However, this terms and conditions differs among various medical insurers and it’s best that you must discuss this with your insurance provider.

Can any of the operated patients be contacted to ask their opinion?

Yes. The neurosurgeon does an assessment regarding your disease in OPD, then decides as to what kind of surgery is best suitable for you and then can give you the address and contact details of the patients who have undergone similar successful surgeries in the past.