Electrical encoding, processing and transmission of information are the co-ordinated steps through which brain cells function. Deep brain stimulation certainly alters the electrical functions of neurons, but relatively unknown is the mechanism by which it alters the function.

The threshold for producing an action potential increases if a neuron is constantly depolarized below the threshold level. As the threshold increases, the firing of neurons becomes difficult.

The abnormal electrical discharge activity that causes the disease is altered by deep brain stimulation. The normal function of neurons is due to constant and regular pattern of activity & this pattern is disrupted by irregular or chaotic firing of neurons.

These abnormally discharging neurons are modified by Deep Brain Stimulation into a pattern of more regular firing which is less deleterious.

The US Food and Drug Administration (US FDA) has given unconditional approval for DBS in essential tremor (ET)&PD in 1997 & 2002 respectively.

Diseases like Dystonia and obsessive-compulsive disorder (OCD) have been granted approval for DBS on humanitarian ground by US FDA in 2003 & 2009 respectively. For treatment in PD, it is currently approved for those group of patients suffering from the disease process for at least 4 years of duration, in patients having complications of drug treatment including motor fluctuations or dyskinesia.

Deep brain stimulation (DBS) is now increasingly being used in patients with a variety of neurologic disorder such as: 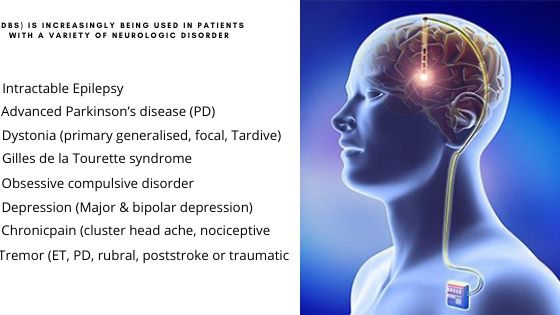 It has been studied on an experimental basis for the treatment of diseases like Autism, Addiction, Aggression, Anorexia, Progressive Supranuclear Palsy (PSP) etc.