History of stereotactic surgery in India

Functional and stereotactic surgeries were first introduced in 1940’s and 50’s, but did not much flourished as expected due to high mortality and morbidity rates in the procedures. Neurosurgery was developed in India after the II world war.

In 1940, pioneers like Chintan Nambiar had performed 74 cases of chemopallidotomy using the free hand stereotactic technique. In 1949, Jacob Chandy and Baldev Singh were established the first neurosurgical centre at Christian Medical College (CMC), Vellore in Tamilnadu. In 1950’s, V. Balasubramaniam and B. Ramamurthi performed the pallidal lesioning with inflatable balloon and alcohol.

In 1970, Dr S. Kalyanaraman (Madras Medical College) has performed stereotactic surgeries using a combination of Leksell and Sehgal stereotactic equipments to perform the simultaneous targeting of many intracranial structures.

Dr R M Verma who was trained in Bristol has started neurosurgical units in AIIMS and was instrumental in establishing National Institute of Mental Health and Neurosciences (NIMHANS).

The Indian Society of Stereotactic and Functional Neurosurgery was formed in year 1997 with Dr V. Balasubramaniam, as its first President. 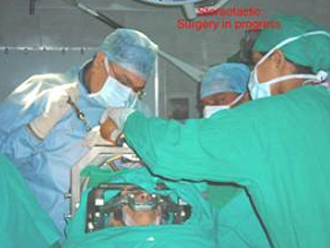